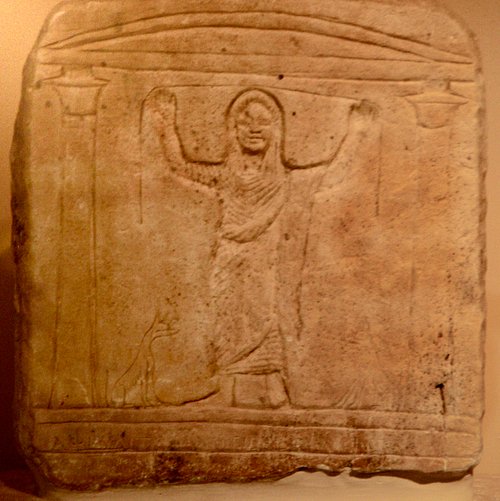 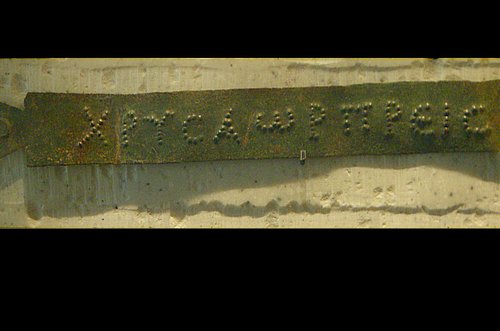 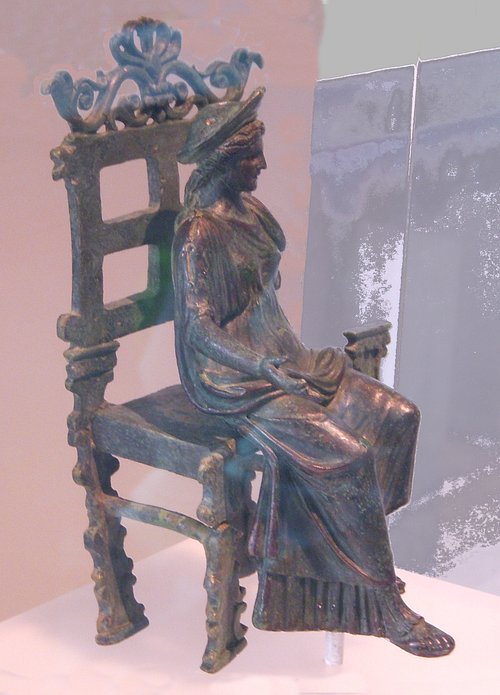 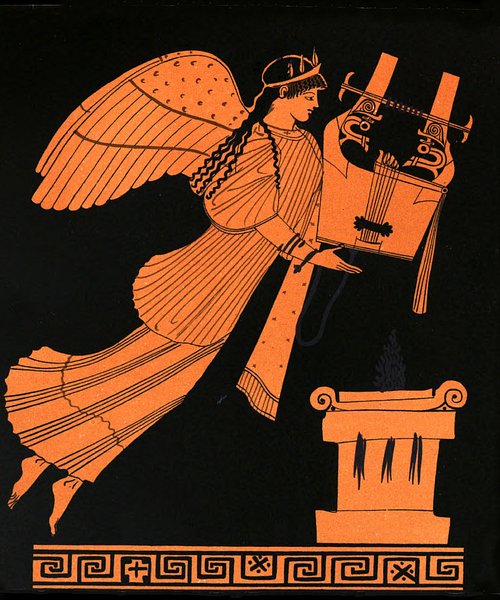 Why do we imagine that angels are beautiful women with wings? Angels in the Bible are rough, tough warriors. Biblical angels are dangerous.

We see this in the biblical book of Numbers, chapter 22, where a prophet-for-hire named Balaam meets an angel who is blocking the way. Balaam doesn't see the angel, but the donkey on which Balaam is riding sees him and avoids him. Balaam beats the donkey, and then sees the angel. The angel says, "If the donkey had not turned aside from me . . . I would have slain you."

A lot of angels don't even look like people. For example, a cherub is not a human baby, but is a beast something like a lion.

We probably get our idea that angels are women from Greek mythology. The goddess of Victory, known as Nike, was a women with wings, and in this picture we see her with a musical instrument, just like our idea of an angel.

The musical instrument is a "kithra," and that is the instrument mentioned in Revelation 5:8, etc., where it is translated as "harp." Actually it was more like a guitar than a harp. Maybe in heaven you will hear a bunch of angels jamming on their guitars.

Here we see a small bronze statue of a seated woman (maybe 18 inches high). It comes from Rome, about the time when St. Paul was active. Her right hand is extended, and it probably held a libation pan, now lost. Her left arm is missing, but probably held a cornucopia (horn of plenty).

She would be a goddess called "Concordia," meaning "concord" or "harmony" or "getting along with one another." The Roman authorities made deities out of the virtues and funded temples for the worship of those virtues. Their hope was that people would take the virtues seriously and behave well in public if the virtues were divine.

St. Paul didn't agree that the virtues were deities, but he agreed that we should live virtuous lives. However his understanding of virtue included one that seemed strange to the Roman authorities. St. Paul taught that "humility" was one of the most important virtues.

The world today seems to be abandoning respect for virtue. We don't want to return to the notion that virtues should be worshipped, but it would certainly be good for people to read a text such as Philippians 2:1-4, and see it as a true guide for life.

This statue is in the Chicago Art Institute, Wirt D. Walker Endowment, 1965.402a-b. Photo by Richard Davies. Do not use the photo for commercial purposes, and if you use it, give credit to the photographer.

In the Western world, October 31st is Halloween, a time to "celebrate" ghosts and witches and magic. In our time it is a children's holiday because we consider those things being celebrated as imaginary. In the Roman Empire these things were considered to be very real.

In the New Testament, Acts 19:11-20, we are told about St. Paul, in Ephesus, being seen as a great magician, and in response people brought their magic books to be burned.

We have quite a bit of archaeological evidence of the ancient belief in magic, including magic words. There is a story about an Ephesian athlete who won every contest because he wore an amulet on his ankle on which were inscribed the secret "Ephesian words."

This month's photo shows part of a Greek headband (made of metal) inscribed with magic words. The words are nonsense. We don't know who wore it or why, but it was supposed to be magic.

You can see this and other headbands in the Louvre, Collection Hoffmann, 1888. Photo by Richard Davies. As usual, you can use it as long as you give credit to the photographer and do not use it for commercial purposes.

This is a gravestone from the third or fourth centuries of the Christian era (200 - 400). The picture is likely the deceased woman, and she is depicted as praying. The ancient prayer position was to spread the arms and raise the hands. The woman is probably a Christian. Otherwise she would most likely be pouring a libation rather than raising her hands.

Look carefully either side of her feet. She is flanked by jackals. (The one to her right is obvious, while the one to her left has been worn  down and is hard to see.) Jackals are the symbol of Anubis, Egyptian god of the dead. The Egyptian religion celebrating Isis was popular in the Roman Empire, but the woman's clothing does not suggest that she was a follower of Isis.

Perhaps this is an example of people using old familiar symbols for a new belief, because they are not sure which symbols to use to represent the new faith.

This gravestone is in the Byzantine Museum in Athens, Greece. Number BXM477. Photo by Richard Davies. You may use the photo freely as long as it is not used for commercial purposes and credit is given to the photographer.

Photo of the Month