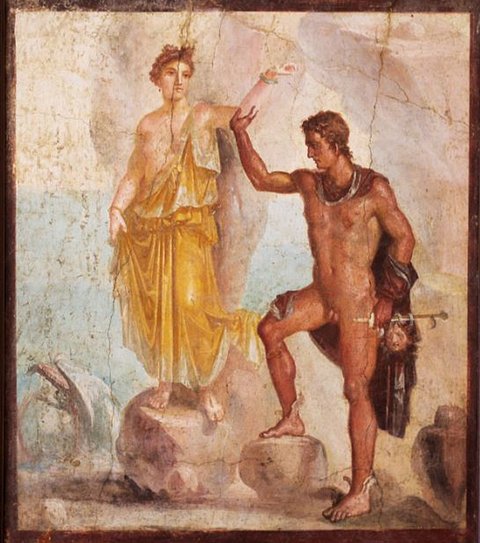 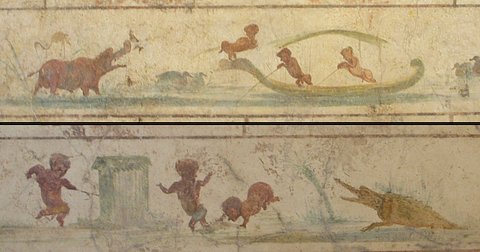 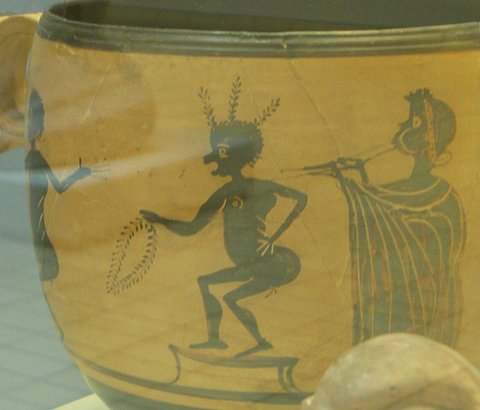 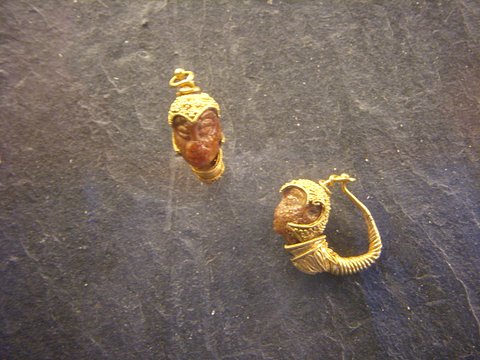 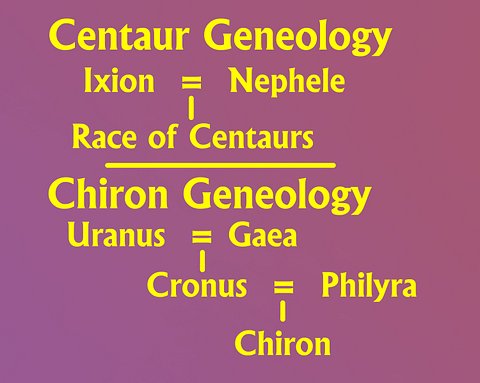 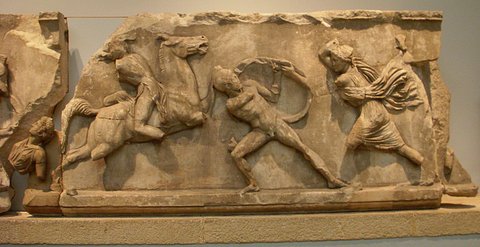 Carving from the Parthenon, currently displayed in the British Museum.

The carving is a bit broken up, but we can see how skilled at warfare these women were. Notice that one of them is riding backwards on her horse in order to get an advantage over her opponent. Another Amazon on foot is overcoming a man.

Recall that women in ancient Greece were to be totally subject to their men. Men did not like Amazons. What was the point of stories about women who didn’t need men, and were also fierce warriors?

Joan Breton Connelly, author of The Parthenon Enigma (2014), discusses these carvings and suggests that the Greek victory over the Amazons is intended to symbolize victory over the Persian army. Connelly is a good scholar, and has written a good book, but I disagree about the Persians. Just as it was O.K. to hate the Centaurs, it was O.K. to hate the Amazons. The Amazons were a symbol for racism.

As we all know, "morality" in ancient Pompeii was not the same as our "morality." In particular, it seems to have been common for men to regularly visit prostitutes. In the ruins of Pompeii we have found many personal sentiments written on walls, and it is worth pondering this one:

The fair lass taught me to loathe the dark-skinned ones.

The message seems to be that Africans are available for sexual recreation, but one should avoid them if possible.

You should also see a bronze oil lamp displayed in the Rezan Has Museum in Istanbul, Turkey. It is in the form of the head of an African with his mouth open. The lamp wick goes in his mouth. Someone in the Roman Empire must have thought this was pretty funny. You can see a picture in Google Arts -- https://artsandculture.google.com/asset/oil-lamp-unknown/XAFFGlbNlYInuw

In fact, in Roman times few people believed that there really were centaurs in this world, but they liked the stories of centaurs. What is this about? Racism. Stories about centaurs allowed the Romans to think that there are people in this world that it is O.K. to hate.

Amazons as Symbols of Racism

The Amazons were women who lived in their own country on the shore of the Black Sea. They didn’t need men, and they were really tough fighters.

On the Parthenon in Athens there were carvings depicting a great battle between the Greek army and the Amazons. Look carefully at this picture:

This is obviously a very old depiction of the myth, and its age demonstrates how many years ago the Centaurs became a symbol of those who were "different" and therefore hated. I have combined two photos of this vase to show the full picture. Displayed in the Antikensamlung, Munich (Munchen), Germany.

The problem is that the myths tell of one really good centaur named Chiron. If centaurs are bad, how can Chiron be good? The mythological solution was to give one genealogy for all the centaurs except for Chiron, and a special genealogy for Chiron. The race of centaurs came from the union of a really stupid fellow named Ixion with a cloud called Nephele. In contrast, Chiron’s grandparents were the Heavens and the Earth, so Chiron was almost a part of the original creation.

Mosaic in the vestibule of an ancient house. Pella Museum, Greece

Centaurs had the body of a horse with the torso of a man where the horse's head should be. They were not well liked. There were many stories about how bad Centaurs were, and Herakles is said to have killed many of them.

Centaurs as Symbols of Racism

Displayed in the British Museum. The museum card simply tells us that this vase depicts "two grotesque nude dancers" and a flute player. Vase B-78 (GR1889.8-8.2).

Here is a pair of earrings that a fine Roman lady once wore. Why would she want to wear African heads in her earlobes? Perhaps because they are strange and not really human. When she would attend a party, other ladies would have mythological critters hanging from their earlobes. Her earrings were like theirs, but better.

Portion of a Roman mural in a Roman cemetery in the time of Julius Caesar. The long horizontal mural depicts upper class life, mythological subjects, and these two sections of a hippo and a crocodile threatening Africans. There is no other "humor" in this mural. -- Roman National Museum Plazzo Massimo.

The ancient Greeks and Romans don’t give us many pictures of Africans, but all of those pictures that I have seen depict them as objects of ridicule. For example, consider the picture of "cute" Africans on the Nile being threatened by wildlife. Or a painting on a pot showing Africans dancing. Do we need to say anything about the racism in these depictions?

Was there Racism in the Ancient World?

There are many books, articles and websites asserting that there was no racism in the ancient world. On the contrary, we have evidence that there was racism. As a matter of fact, there has been racism in every society. Racism, in its most general form, is prejudice against anyone who is not just like you, or has not come from your “family.”

To find ancient racism, you have to know where to look, and on this page we’ll say something about where to look.

Racism is never justified. No one should ever be a racist. Some may look at this page and feel good about their own racism, making the excuse that, because racism is very ancient, it must be correct. If you are one of these people, change your mind. You would also be able to justify your own racism if we could show that there was no ancient racism.

Let’s start with the myth of Perseus. His father was Zeus, and his mother a mortal woman named Danae. (There is a story there that we don’t need to tell.) After Perseus had grown up, a king lusted after Danae, and thought he could have his way with her if he got rid of her son, so he sent Perseus on a suicide mission. Perseus called on the gods to help him with this mission, and the gods loaned him some winged sandals for fast travel through the air, a hat that would make him invisible, and a special sack. (I think it was lined with lead or something.)

The mission was to bring back the head of Medusa, a lady who had snakes growing out her head instead of hair. She was so ugly that anyone looking at her would be turned to stone. Perseus found out where Medusa and her sisters lived, flew there, put on the hat, cut off Medusa’s head, put it in the sack, and flew away. Since he was invisible, Medusa’s sisters couldn’t follow him.

On the way home, he went past the ancient city of Joppa. (The New Testament tells us that St. Peter spent some time there, and today it is a suburb of Tel Aviv. It is one of the oldest cities in the world.) In Joppa a woman named Andromeda, the daughter of the king of Ethiopia, was chained to a rock next to the Mediterranean Sea so that a sea monster could come and eat her for lunch. (We don’t need to say why she was being offered to the sea monster.) The short story is that Perseus killed the sea monster and married Andromeda. Then he went home and rescued his mama from the evil king by turning the king to stone. He returned the sandals, hat, and sack to the gods, and the goddess Athena put the head of Medusa on her military armor.

As we hear this story, the crucial thing for us is where the wife of Perseus came from: Ethiopia. Andromeda was clearly a black African. Some have tried to say that she wasn’t black. They say the king of Ethiopia was not from Ethiopia, but from somewhere else. He came to Ethiopia to take care of the helpless Africans. Nonsense! She was black African. She and Perseus were the parents of seven successful children. We are told that he was the great-grandfather of Herakles (Hercules), or at least the great-grandfather of the twin brother of Herakles (since Zeus fathered Herakles, just like Zeus fathered Perseus).

The problem is that we don’t find any pictures of Andromeda as a black woman. In recent years some have drawn her accurately, but if you look at most pictures, from ancient times until the twentieth century, you would think that Andromeda comes from Finland. Why? I suggest that racism is at work.

Juvenal, Roman author of biting satire, provides a window into Roman racism. He seems to presume that all black people will be slaves, and also seems to presume that they will be the least desirable slaves. In Satire no. 5, he impllies that it is an insult for a host to have a guest provided drink from "the bony hand of some Moor, so black that you would rather not meet him at midnight."

In Satire no. 8, he is making the point that a name, by itself, is meaningless, and to make that point he notes that slaves are often given absurd names: "We call someone's dwarf, 'Atlas,' a negro, 'swan,' a diminutive and deformed wench, 'Europa' . . ." Juvenal and his readers apparently have scorn for anyone who is "different."